Low back pain is common musculoskeletal disorder affecting 80% of people at some point in their lives. It can be either  acute, sub-acute or chronic in duration. With conservative measures, the symptoms of low back pain typically show significant improvement within a few weeks from onset.

A prolapsed disc occurs when the annulus is damaged or torn (typically by a twisting movement of the back). The nucleus pulposus is squeezed out, or prolapses and may compress a nerve root in the space between the vertebra and surrounding ligaments typically causing sciatica. 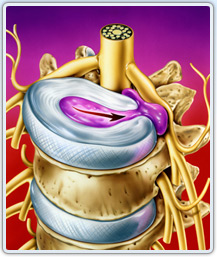 Lumbar discs in the lower back are the ones most likely to be damaged and prolapse. Whether or not sciatica develops, depends upon the position of the prolapse and the size of the spinal canal.

If there is sufficient space for the prolapsed disc to occupy, then back pain alone will occur. However, if the space is too small to accommodate the prolapsing disc, then pressure (or compression) of the nerve root will occur. This will cause leg pain and/or other symptoms in the specific region supplied by the nerve.

Cartilage in the spine is subject to degenerative changes with advancing age, just as it is elsewhere in the human body.  Fibrocartilage of the intervertebral discs degenerates and is replaced by fibrous tissue components. This results in the loss of a shock absorbing effect between segmental pairs leading to increase pressures upon opposing surfaces of the vertebral bodies. This pressure/opposing surface factor results in a biodefensive increase in bone formation at the respective sites. Accordingly, spondylitic hypertrophy results in the formation of peripheral osteophytes which may totally bridge the intersegmental space and become united forming an ankylotic juncture. Due to the increased pressure/stresses on apophyseal joints, the articular cartilage of the facets is gradually denuded. Also, the apophyseal joint interval is narrowed with bony surfaces becoming sclerosed and irregular. These biomechanical changes result in articular process displacement and subluxation with overlap. As a result, neurothlipsis takes place with encroachment upon the nerve root which exits at that respective level. Rheumatoid (atrophic) arthritis may coexist with this osteoarthritic process and means that the atrophic changes have been reduced in speed of progress in the presence of osteoarthritic pathology, although it may still be active. Since these degenerative changes affect the annular ligaments, these individuals have a diathesis to disc protrusion with the consequence of need for differentiation of radiculoneuralgia of foraminal encroachment. 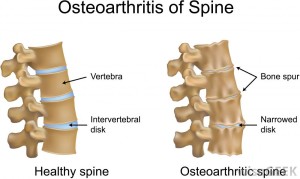 Symptoms typical of degenerative arthritis involve pain and stiffness when resting which are reduced in intensity upon becoming physically active. This physical activity must be performed in moderation because excessive bending and lifting tend to exacerbate the symptoms, as does cold, damp weather. When there is referred pain it tends to indicate the presence of nerve root pain and may include muscle spasm and paresthesias with chest and abdominal pain which may simulate visceral disease. The entire spine may be flattened and stiff with limited motion, especially in the lumbar region, where forward bending may be performed primarily by hip motion. Radiographic findings present with loss of articular cartilage from the facets posteriorly and fibrocartilage from the disc anteriorly with secondary bony hypertrophy of the articular cortex.

Lumbar spine stenosis most commonly affects the middle-aged and elderly population. Entrapment of the cauda equina roots by hypertrophy of the osseous and soft tissue structures surrounding the lumbar spinal canal is often associated with incapacitating pain in the back and lower extremities, difficulty ambulating, leg paresthesias and weakness and, in severe cases, bowel or bladder disturbances. The characteristic syndrome associated with lumbar stenosis is termed neurogenic intermittent claudication. This condition must be differentiated from true claudication, which is caused by atherosclerosis of the pelvofemoral vessels. 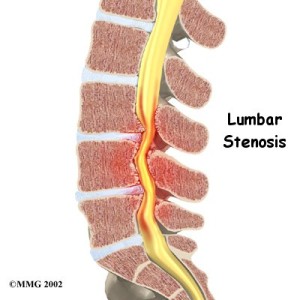 Although many conditions may be associated with lumbar canal stenosis

Spondylolysis is a word that is used to describe a condition where there is a defect in a specific region of the spinal column.

This region of the spinal column, called the pars interarticularis, connects adjacent vertebrae in the spine.

Spondylolysis can be asymptomatic, or it can be quite painful. When the condition is bilateral (occurs on both sides of the spine) it can cause a condition called spondylolisthesis. 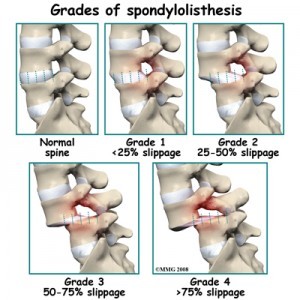 In this condition, a vertebral body can “slip” forward over the vertebrae directly below. The reason this occus is that the normal stuctures that connect adjacent vertebrae are missing, and therefore the spinal column become unstable.

The sacroiliac joint is formed by the connection between the sacrum and the iliac bone on either side. The sacrum consists of five fused vertebrae below the lumbar (lower) spine, where the iliac bone is the large bone that makes up the pelvis. A thick band of ligaments hold this joint together. There is very little normal motion between these two joints, however this joint does support much of the weight of our upper body when we are in the upright position. When this joint becomes injured or inflamed, pain can result, a condition called sacroiliac dysfunction. 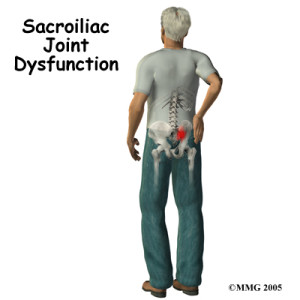 Motion of the Pelvic Girdle

influenced by the lower extremities below and the vertebral column and the trunk above.

Anterior and posterior rotations are relative movements between innominates and sacrum.

They are not synonymous with anterior and posterior pelvic tilts.

• Upslip – Superior translation of the ilium on sacrum, occurs frequently during weight

bearing, always occurs with rotation and sometimes with a flare

• Downslip – Inferior translation of the ilium on sacrum, occurs during unloading of limb

Myofascial pain syndrome (MPS) is a fancy way to describe muscle pain. It refers to pain and inflammation in the body’s soft tissues.

Myofascial pain is a chronic condition that affects the fascia (connective tissue that covers the muscles). Myofascial pain syndrome may involve either a single muscle or a muscle group. In some cases, the area where a person experiences the pain may not be where the myofascial pain generator is located. Experts believe that the actual site of the injury or the strain prompts the development of a trigger point that, in turn, causes pain in other areas. This situation is known as referred pain. 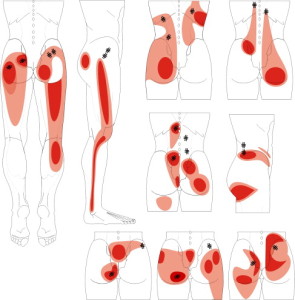 Myofascial pain may develop from a muscle injury or from excessive strain on a particular muscle or muscle group, ligament or tendon. Other causes include:

Scoliosis is a rare spinal condition in which the spine abnormally rotates and curves from side to side. Scoliosis can range from very mild to extremely severe, depending on the degree of the curvature of the spine. 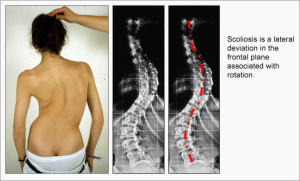 Curvatures of 10 degrees or less are not considered true scoliosis.   Curves less than 30 degrees are usually watched and followed through serial x-rays taken over time as a child grows to catch any significant changes.  Curvatures beyond 30 degrees are often treated by an orthopaedic brace to help limit curvature. A brace is often recommended for children still expected to grow.

The term kyphosis is used to describe an exaggerated curvature of the spine that gives the back a rounded appearance. Kyphosis can be caused by a number of conditions including poor posture, osteoporosis, long term use of steroids or spine tumors. In the most serious cases, a dramatic curve happens after multiple vertebra fracture and collapse. A physical examination and x-rays of the spine will provide the physician with the information needed to determine the extent of any spinal abnormality. A curve of more than 45 degrees is considered abnormal.

The most common form of kyphosis is attributed to poor posture and is defined as an exaggerated but flexible increase of the natural curve of the spine. This usually becomes noticeable during adolescence and is more common among girls than boys. It is rarely painful and doesn’t it usually lead to a more serious condition. Exercises to strengthen the abdomen and stretch the hamstrings may help take away associated discomfort but usually won’t correct the curve