The knee joint consists of an articulation between four bones: the femur, tibia, fibula and patella. There are four compartments to the knee. These are the medial and lateral tibio-femoral compartments, the patella-femoral compartment and the superior tibio-fibular joint. The components of each of these compartments can suffer from repetitive strain, injury or disease.

Around the knee there are primary two groups of muscle act on knee: Extensors or quadriceps muscles  present at front of the thigh and flexor or hamstring muscle present at the back of the thigh.

Extensors:  The quadriceps muscle is the primary extensor of the knee and consists of four muscles:  vastus intermedius, vastus lateralis, vastus medialis, and rectus femoris. The rectus femoris is the only one of these muscles that crosses both the hip and knee, allowing it to joint also act as a hip flexor. 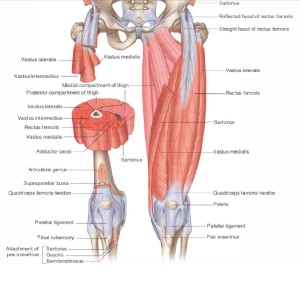 Impairments– Quadriceps muscle impairments related to knee pain may include poor performance or over recruitment. The oblique portion of the vastus medialis (VMO) may provide an important restraint to lateral patellar displacement given the angulation of the fibers that attach to the patella. Poor performance of the VMO may contribute to excessive lateral patellar displacement. With intensive physical training or loading through weight training or sports, the quadriceps may become relatively too stiff or short and contribute to excessive stress on the patella, patellar ligament, or tibial tubercle. This excessive pull superiorly may be associated with patella alta. In contrast, the quadriceps can become functionally weak when habitual alignment of knee hyperextension is present.

Impairments-The hamstrings are at risk of overuse when synergists, such as the gluteus maximus are underused.  For example, when the foot is fixed on the ground, the hamstrings can extend the knee by pulling the knee back to the body through its action as a hip extensor. Usually, when hamstring dominance such as this occurs, the quadriceps and gluteus maximus are not performing optimally. This movement impairment is commonly seen in individuals with a swayback alignment and genu recurvatum. 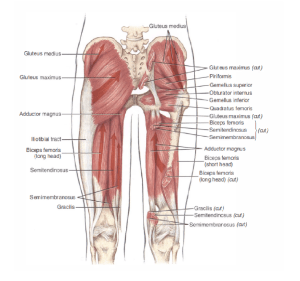 Hip muscles that can affect the knee-

The TFL-ITB is a two-joint muscle complex that flexes, abducts, and medially rotates the hip and laterally rotates the tibia through its insertion onto the lateral tibial tubercle. The TFL-ITB also assists in stabilizing the knee when the knee is extended, although it does not actively extend the knee. When the TFL-ITB becomes short or too stiff, it can cause a compensatory motion such as lateral tibial rotation or valgus at the knee. The TFL-ITB can also contribute to patellar lateral glide as a result of its insertion on to the lateral patella.

Arthritis is a complex family of musculoskeletal disorders consisting of more than 100 different diseases or conditions that destroy joints, bones, muscles, cartilage and other connective tissues, hampering or halting physical movement. Osteoarthritis (OA) is one of the oldest and most common forms of arthritis and is a chronic condition characterized by the breakdown of the joint’s cartilage. Cartilage is the part of the joint that cushions the ends of the bones and allows easy movement of joints. The breakdown of cartilage causes the bones to rub against each other, causing stiffness, pain and loss of movement in the joint. 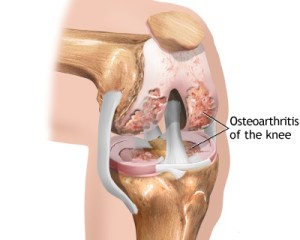 Morning stiffness, which usually lasts no more than 30 minutes

Deterioration of coordination, posture and walking due to pain and stiffness

Prepatellar bursitis (also known as beat knee,  carpet layer’s knee, coal housemaid’s knee, rug cutter’s knee, or nun’s miner’s knee, knee) is an inflammation of the prepatellar  bursa at the front of the knee. It is marked by swelling at the knee, which can be tender to the touch but which does not restrict the knee’s range of motion. It is most commonly caused by trauma to the knee, either by a single acute instance or by chronic trauma over time. As such, prepatellar bursitis commonly occurs among individuals whose professions require frequent kneeling

Patellar tendinitis (patellar tendinopathy, also known as jumper’s knee), is a relatively common cause of pain in the inferior patellar region in athletes. It is common with frequent jumping and studies have shown it may be associated with stiff ankle movement and ankle sprains.[

Some common injuries include:

Hemarthrosis- Hemarthrosis tends to develop over a relatively short period after injury, from several minutes to a few hours.